William Harris Walpole was a successful businessman who’s shrewd investments had resulted in him owning three steam traction engines and substantial threshing equipment. As an important businessman he built “Engine House” on Main Road, Dyke as his family home and placed an interesting date stone above the front door.

William Harris Walpole would today be called an agricultural contractor who was available for hire with his traction engines and threshing machines.

William Harris Walpole would today be called an agricultural contractor who was available for hire with his traction engines and threshing machines..

This start of agricultural mechanisation assisted at times of greatest need and William Walpole recognised an opportunity existed for agricultural contractors to aid farmers at times of high work load. 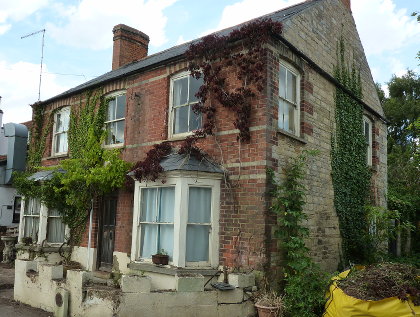 The Engine House, Dyke built by William Walpole in 1896. Photograph © B. Parkinson

The 19th century had seen significant developments in how power was produced in a convenient form and in large quantities. With the advances in steam power manufacturing had change from a craft base to large scale production in factories operating large numbers of machines doing jobs in far less time than had previously been the case. The technology had even been transferred to mobile units and traction engines were being used for pulling, lifting and carrying. Farmers realised the advantages to using such equipment but it was both costly to purchase and needed new skills to maintain. So enter the contractor who could be employe with his engine to plough a field or harvest a crop in super fast time and then move on to the next job. Joseph Walpole realise the potential of these traction engines especially living in a rural area like Lincolnshire. As a result he started a successful threshing business that enabled farmers in the area to carry out a harvest in a much shorter time and with less labour. When Joseph died in 1895 his son William took over the business and saw it flourish and grow. Born in 1843 William was an enterprising man and soon had three traction engines available for contracting. 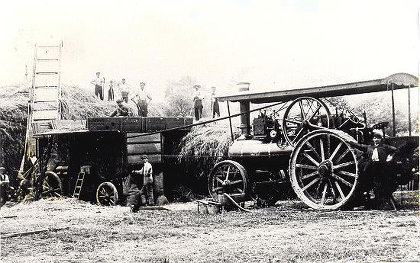 Steam traction engine powering a threashing machine in 1905. William Walpole is leaning on the threshing machine. Reproduced from “A Portrait of Bourne” © Rex Needle 2015.

The traction engines and accompanying threshing machines were regular visitors to farms in the Dyke area around harvest time. The activity was a very different scene to that we find today with large numbers of men and women cutting the wheat down with scythes ready for tying into bundles. The bundles were then made into sheafs and finally stacked vertically into stooks that allowed air to circulate around the wheat heads and dry ready for threshing. The photo above shows William Walpole in 1905 working one of the threshing engines which has a belt drive connected to the flywheel of the traction engine he is leaning on.
Steam traction engines were built by a number of manufacturers during the later half of the 19th century and continued into the early part of the 20th by which time the internal combustion engine had taken over as the primary power source. J & H McLaren opened the Midland Engine Works in Hunslet, Leeds in 1876 and developed a reputation for strong, reliable engines which were highly regarded by their owners. The photograph below shows a McLaren agricultural engine owned at the time by Walpoles being employed on the Ash farm, Dyke in 1935. The McLaren factory closed in 1952 although around 100 engines still survive and are highly cherished by their enthusiastic owners. 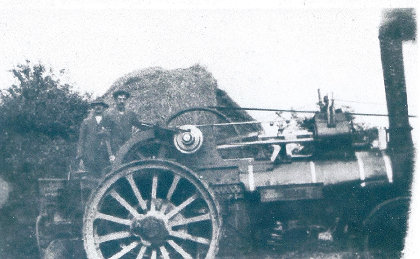 A McLaren traction engine being employed on the Ash’s farm, Dyke, in 1935.

William Walpole was a successful businessman through hard work and shrewd investments.He had expanded his threshing equipment stock so that it included three traction engines, a substantial investment at that time.

William had not only expanded his business investment he had also expanded his family for by now there were three sons, George, William Junior and Joseph. As the sons grew up they gradually became employed in the business. William was well known in the area and took a keen interest in local village affairs. In 1894 he became one of the first members of the newly formed Bourne Parish Council. He subsequently became an elected member of the Bourne Urban District Council when it replaced the Parich Council in 1899. 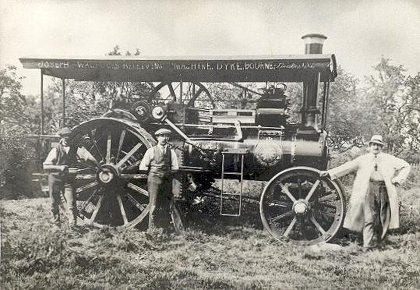 Joseph Walpole on the right seen leaning on his Ransomes, Sims and Jefferies traction engine 1928.

In 1896 William was an important business man in the area and needed a house to reflect his position. As a result he built “Engine House” on Main Road, Dyke and placed a date stone above the entrance door. The stone gives the date and has an outline of a traction engine cut into it showing the importance placed on the business William ran. 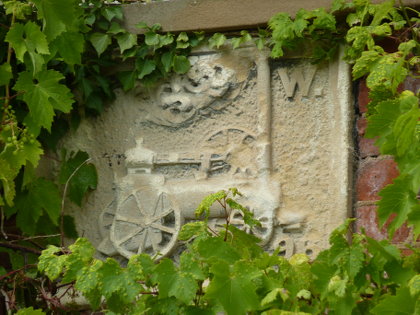 The date stone located above front door of Engine House built in 1896. The stone clearly shows the outline of a traction engine as owned by William Walpole who originally built the house. Photograph © B. Parkinson.

Welcome to Spalding: A web site providing information on