The spirit of the community is important to village life whether it be in work or play. It involves people doing “things” together, sharing the load and taking responsibility for others. Enjoying fun together no matter how simple, it is the togetherness that is important.

Dyke is no different to hundreds of villages dotted around England. The villagers enjoy having fun and being together.

Dyke is no different to hundreds of villages dotted around England. The villagers enjoy having fun and being together..

The feeling that there is always some one to laugh with and some one with a shoulder to cry on when needed.

That is what this page is about reminding us of what life was like in the not so distant past. Village life depended upon people,those who lived in the village. It required people to organise and for all to share the enjoyment that resulted from that organisation. As in most rural areas, life in Dyke depended upon the land, the seasons and the weather. 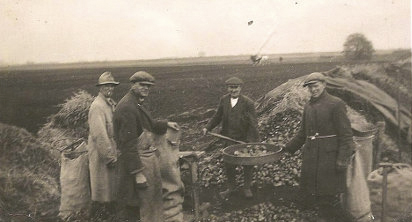 The photograph shown above was taken in 1938 and shows potatoes being riddled by hand on Gibson’s, later Ash’s, Farm, Dyke Fen. One man shovels potatoes from the pile into a sieve which is then shaken by hand to remove soil. The cleaned potatoes were then picked up and placed into sacks, a full sack standing to the left of the two men filling them. It was hard work often involving long hours in cold, damp weather. Workers today have to be thankful for tractors with warm cabs. In the background of the photo is a horse drawn plough readying the field for the next crop to be sown. 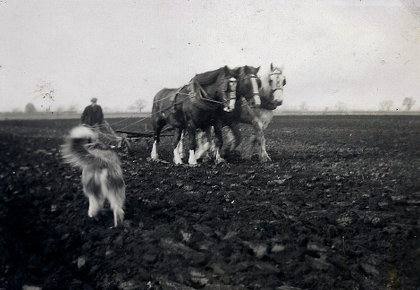 Horse drawn plough being used on Dyke Fen in 1938.

Steam traction engines had started to appear on farmers in the late nineteenth century. They became common around the countryside used as mobile power plants for threshing, pulling out tree roots, ploughing and general farm applications where significant power was required. They were not generally owned by the farmers themselves but by contractors who operated them. In Dyke William Walpole (1843 – 1907) became a well known contractor eventually owning three traction units. He lived on Main Road Dyke in what became known as Engine House from where he ran his business of hiring out threshing machines for harvesting. The date stone over the front door of Engine House clearly shows the outline of a traction engine, the item that became the source of William Walpoles wealth. Manufacture of the traction engine declined during the 1930’s and were slowly replaced by the petrol/paraffin tractor which was less costly and simpler to operate. 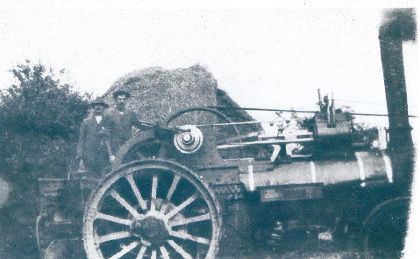 Steam traction engine at work in the field. 1935. Reproduced from “A Portrait of Bourne” © Rex Needle 201.

Even into the 1950’s horse power was still being used, remember “Steptoe and Son” on BBC TV? In 1953 Queen Elizabeth II was crowned all celebrations were held all over the country. Dyke had a street procession in which Mr Enderby proudly presented his well groomed horse and cart. At the time Mr Philip Ash’s farm employed about 25 workers on a permanent basis with Henry Mills the manager. With increased mechanisation fewer workers are required, today the farm employs only 4 full-time workers. 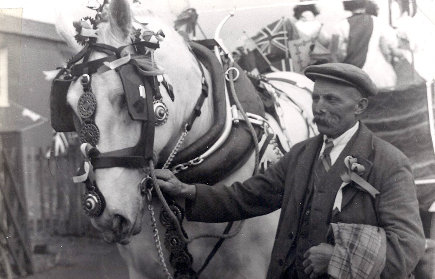 Mr Enderby, his horse decorated with brasses and pulling the Queens Coronation float. 1953.

As a village community you know your neighbours well, you live and work with and near them day in, day out. Working in a physical way with people means you have to trust them. Accidents could all too easily happen and sometimes resulted in long lasting injuries that could limit your capabilities to work and earn a wage. Communities shared there enjoyment and honoured those who had provided a valued service. In 1947 Miss Darnes (centre of photo) retired from being the elementary teacher at the small school in Dyke. Being a one roomed school she had taught and knew all the children in the village and they turned out to a reception where a small presentation was made. 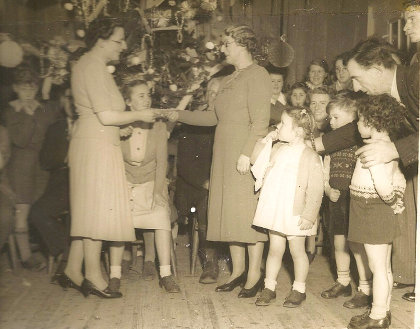 Presentation being made to Dyke school teacher Mrs Darnes upon her retirement. 1947.

In 1951 a new radio programme started, The Archers, “an everyday story about country folk”. It became an immediate hit. The ending of the second world war was a relief but there were tough times ahead. It was the time of Meccano, Dan Dare, Formica, the Comet airliner, Tide and Surf washing powders. Things were changing, but in the villages life went on very much as before. Christmas was not the commercial affair it is today, people simply did not have the money. It was, however, a time to celebrate, to get together with others and let your hair down. A time for parties and the village hall was a good place in which people could come together and enjoy themselves without having to spend a lot of money. Although austerity was still very much in evidence the post war years did see people enjoying things they organised and produced. Whilst the average family was far from being rich there was a feeling of optimism, a “wanting” to achieve. Children’s parties had plenty to eat, lots of home grown produce and home baked cakes. There were no supermarkets to rely on you needed to plan and do with what was available. The country had faced a common enemy and now people continued working together with nobody going home hungry. 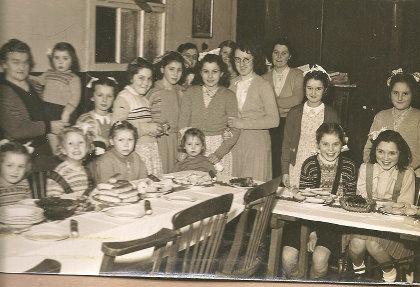 Parties were not restricted to the young, grown ups also let their hair down, well, most of them. Dyke had a football club and they organised a carnival dance one Friday evening. I hope it did not interfere with the result achieved the following day! Any excuse, if one was needed, and a party was organised. Perhaps it had something to do with not many people having television? Dyke had a Village Committee that organised a number of events and the photograph below shows the members enjoying a Christmas bash along with their helpers in 1950. I don’t know what Miss Bo-Peep was doing, perhaps looking for lost sheep? 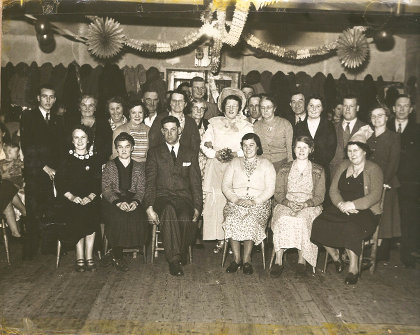 Dyke Village Committee and helpers enjoying a Christmas party in the Village Hall. 1950.

May Day all but vanished from the festive calenda following the English Civil War in 1645r.

Oliver Cromwell described maypole dancing as “heathenish vanity generally abused to superstition and wickedness.” Legislation was passed which saw the end of village maypoles and they did not return until the restoration of Charles II, the Merry Monarch. May Day can still be seen taking place on village greens with the crowning of the May Queen. The gentlemen of the village also celebrate with Jack-in-the-Green, otherwise found on pub signs known as the Green Man.

The village green has, over the years, been the scene of many and varied activities. One such activity is football loved by boys of all ages. Below is a photograph of a group of village boys, the Dyke Rangers, on the village green ready to play football. No fashion shirts or fancy boots but they no doubt enjoyed the game just the same. 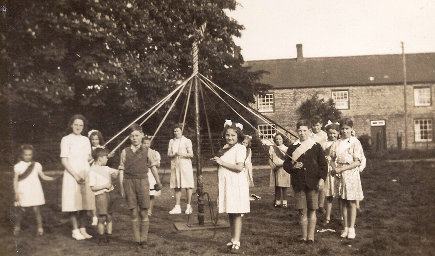 Children dancing around the Maypole on village green 1950.

The village green has, over the years, been the scene of many and varied activities. One such activity is football loved by boys of all ages. Below is a photograph of a group of village boys, the Dyke Rangers, on the village green ready to play football. No fashion shirts or fancy boots but they no doubt enjoyed the game just the same. 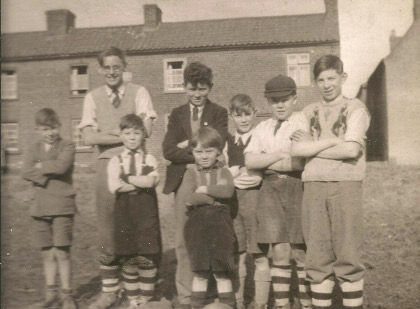 On Tuesday 2nd June 1953 Queen Elizabeth II was crowned in Westminster Abbey, London. It presented the country with an opportunity to celebrate after all we had been given a public holiday to enjoy. As with many villages, Dyke formed a Coronation Committee and a programme of events was organised. A Civic Service was held in the morning on the green followed in the afternoon with a carnival Parade. Sadly, the weather was very British and the day was spoilt with more than a shower of rain. Typical!. However, being British and resourceful villagers carried on regardless. 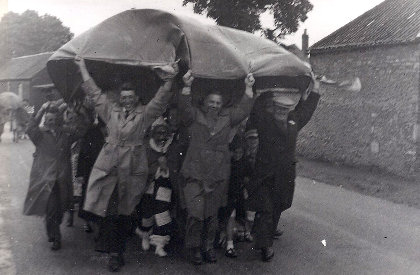 Sheltering from the rain on a wet Coronation day. 1953.

A telegram was sent by the village to the Queen and received the following reply. “Please convey the Queen’s sincere thanks to all those who joined with you in your kind and loyal message on the occasion of Her Majesty’s Coronation” It was signed “Private Secretary” Celebrations continued in Dyke on the following Saturday when a Fancy Dress Parade took place led by the Carnival Queen who was ceremoniously carried on a cart drawn by Mr Enderby’s suitably regaled horse. 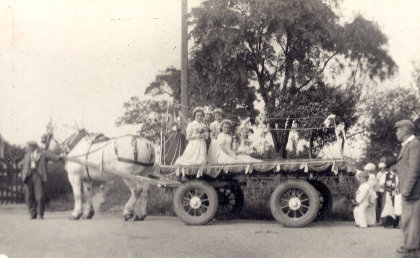 A programme of sporting events followed the mornings procession. The afternoon’s events included a tug-of-war between workmen from Ash’s farm and a team made up from the “Rest”. The “Rest” winning the day on this occasion. The same teams caused considerable interest and much amusement when taking part in a comic football match. Children enjoyed taking part in a fancy dress party which took place in the village hall. At 10pm a torchlight procession marched from the village green to the Recreation field where a bonfire had been prepared. Once lit onlookers were soon dancing and celebrating the happy occasion which culminated in a grand fireworks display. Tired, well fed and feeling contented the village went to bed with a feeling of optimism. A new Queen crowned, peace once more restored and a bright future to look forward too. If life was only that simple! Flower Sunday After dark and cold winter days the coming of spring is something worth welcoming. Ancient Greeks and Romans both welcomed the coming of spring with Easter being the oldest and most important Christian festival. The word is derived from the Anglo-Saxon word for April which was Eostremonath, the month of “openings”. The English monastic historian Bede notes that the month of April was named after the Anglo-Saxon goddess Eostre. rituals related to Eostre focus on new beginnings, fertility as was symbolised by the hare and hence the Easter bunny. Around this time of year the Baptist Chapel in Dyke celebrated Flower Sunday and children from the Sunday School paraded flowers through the village. A Flower Queen was elected who’s role after the procession was to deliver flowers to the sick. An evening service was held and the choir was supported with the organ being played by Audrey Fenney during the 1960’s. 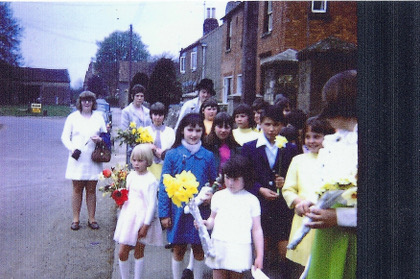 The Queens Jubilee Twenty five years later Dyke again held a celebration this time to for the Queens Jubilee. A carnival procession took place followed by sports in the afternoon, same format used 25 years previously. A Jubilee Tea took place in the Mission Hall, later the Village Hall, followed by a tug-of-war. Later in the afternoon there was a children’s dance and later a dance and barbecue for all villagers to enjoy. This took place in Mr Andrew’s barn and rounded off another well organised and enjoyable day. 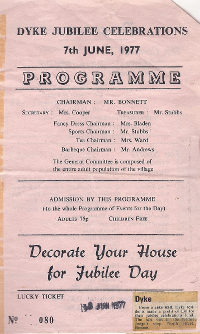 In researching this page reference was made to the folloqwing:

A Scarapbook put together by Mrs E.Needham amd celebrates life and events in Dyke through the years.

A Portrait of Bourne by Rex Needle 2015.