With its name originating from its position on the Car Dyke, Dyke is really a hamlet and not a village. The area was originally a marsh consisting of fresh and salt water wet lands lying only a few metres above sea level. Drainage of the Fens area was begun by the Romans and continues to this day.

Why call a village “Dyke”?

Dyke lies in South Kesteven approximately 2 miles north of the market town of Bourne and is really a hamlet and not a village.

Dyke lies in South Kesteven approximately 2 miles north of the market town of Bourne and is really a hamlet and not a village..

“Hamlet” has no legal meaning although traditionally it means a village or settlement that has no church.

Hamlets were generally formed around a particular source of economic activity such as a farm or mill which provided for and housed its workers. As a self sustaining unit, the populace of such hamlets tended not to travel far, there was little need. The village name of “Dyke” originates from its position on the banks of the Car Dyke which runs north to south along its eastern edge. The area was a naturally marsh area consisting of fresh or salt water wetlands lying only a few metres above sea-level. Drainage of the Fens area was begun by the Romans and continues to this day. There is no reference to a Roman name for the Dyke but by the 13th century the waterway was owned by a man called “Kari”. The dyke became known as Kari’s Dyke which later became Car Dyke. The word “Car” in old english means overgrown particularly with marsh, reeds and shrubs, appropriate for the present condition. Work on the Car Dyke was begun by the Romans in AD125 during the reign of the Emperor Hadrian. It ran along the western fens from the River Cam near Cambridge to the River Witham just south of Lincoln, a distance of approximately 85 miles. This meant it connected Lincoln in the north with Peterborough in the south. Whilst no single reason for building the Car Dyke has been established it is thought that it was primarily intended as drainage for the area. Without such drainage flooding would take place during rainy periods due to water from further inland flowing eastward down towards the sea. This was an area that was notoriously dangerous to cross being predominantly boggy land. It is likely that the position of the road now know as Main Road running through the village of Dyke is in its present position as it was the firmest ground in the vicinity and used as a safe footpath for crossing the fen. Due to the development of water management and drainage systems the area in now safe and no longer a risk to livestock and people who previously could disappear in muddy marshland. After the Romans left the area work continued on the fen and was particularly active in the 17th and 18th centuries. An Act for Draining and Improving Certain Low Marsh and Fen Lands lying between Boston Haven and Bourne came into effect in 1765. 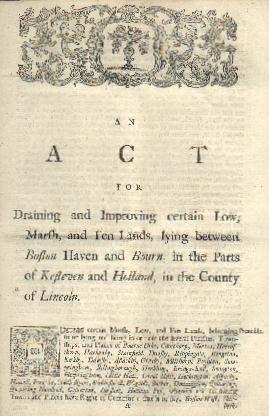 The 1765 Act put into action extensive engineering work to improve drainage embankments and preserve water courses through the fens. It also provided a further source for raising taxes that paid for future maintenance and developments. Although the 1765 Act involved local government action, much of the work in developing and maintaining the fen drainage was carried out by small and local groups interested in preserving and improving drainage in their fields and villages.

The development of Car Dyke

In previous times the Car Dyke is considered to have been larger than we find it today.

Four bore holes were made across the Car Dyke at Dunston Fen, Dunston, with an aim of determining the depth of the original dyke. These excavations have suggested the Car Dyke had originally been approximately 14.5m wide at the top and between 2m and 4m deep with sloping sides and a flat base. A trial trench was excavated near the Fen Road, Washingborough uncovered the Car Dyke complete with tow path. This suggested it was used for purposes of transportation at least in that section of the watercourse. It may also be reasonable to propose that given Car Dykes past dimensions it played some part in determining the positioning of Dyke village. The land was drained to enable farming and ease of transportation of goods into and out off the area would influence any decision taken regarding where to establish a home. In March 2002 deposits of clay, sand and gravel thought to have formed part of the west bank of the Car Dyke were recorded at The Old Vicarage, Church Street Thurlby. Also found during excavations of the Car Dyke were a Roman shoe and roof tile. 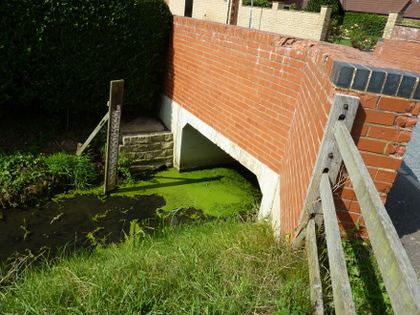 It has taken more than three hundred years to drain the fen lands which now provide an effective means of control against flooding in the area. Even given its dimensions, the Car Dyke is thought to have not been primarily built for navigation. Its main function was being drainage control for diverting flood waters flowing from inland areas towards the sea. However, a waterway of such proportions was used for navigation as proposed by William Stukeley in the early 18th century. Born in Holbeach William pioneered the investigation of Stonehenge. He proposed that the Car Dyke was originally built to supply the Roman Armies located in the north of England with grain and other goods from the Lincolnshire and Cambridge areas. Indeed, excavations in the 1990’s at the south of the dyke near Waterbeach, Cambridge, found what is thought to be the remains of a Roman-era boat loaded with a cargo of pottery from Horningsea. A more recent use of the dyke for transportation was indicated in the records of Henry Penn in 1717. At his foundry in Peterborough Henry Penn cast a church bell weighing 12cwt (610kgs) intended for hanging in Lincoln Cathedral. Transporting such a heavy object was both expensive and slow given the carts available and condition of tracks connecting the two locations. Once cast Henry Penn decided to transport the bell from his foundry in Peterborough to its final destination at Lincoln Cathedral, a distance of approximately 55 miles, on a wooden raft which was sailed along the Carr Dyke. On its journey it passed through Dyke village at a time when the Car Dyke was not so over grown as is witnessed today. The bells was finally hung in Lincoln Cathedral where it remains today being the sixth in a group of eight bells in the south west tower, St Hugh’s tower. Today Car Dyke is recognised as the largest of the known Roman British canals with the length between Dyke village and Bourne town being registered as a scheduled ancient monument. 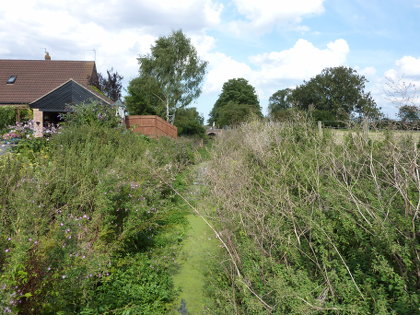 In its present condition the Car Dyke needs some maintainance and near to Wath Bridge in Dyke village it is significanly over grown hiding much of its former glory and the fascinating history associated with it.

Wikipedia, information regarding The Fens.

Car Dyke in Lincolnshire from the web site “Lincs to the Past”.